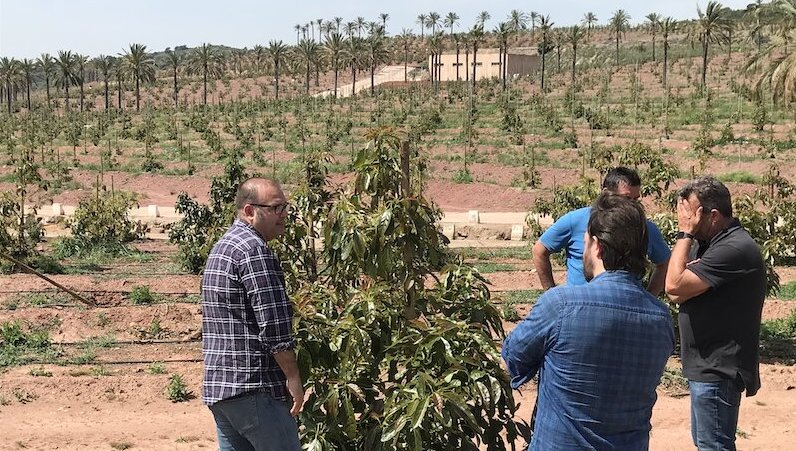 The company from Almeria has solved the problems arising from early flowering, such as cold weather in the southern area and high temperatures in the Levantine region, doubling the fruit set and maintaining the fruit in comparison with areas not treated with CalFlux and XStress.

Ecoculture Biosciences has managed to improve fruit set in avocado plantations on the Costa Tropical of Granada and Malaga and in the plantations of the Spanish Levante region during the last month, solving various stress problems that these have had in early varieties that brought forward their flowering.

In the crops of the Costa Tropical of Granada and Malaga, the early flowering led to an increase in the exposure of the flower to cold and rainy days, which caused the fruit not to set properly. The harvest of the trees not treated with Ecoculture Biosciences solutions was a maximum of three fruits per panicle; while the minimum of fruits on the trees treated with CalFlux and XStress was between six and eight, that is more than twice in comparison with the untreated areas where there was fruit loss.

The same percentage of harvest increase occurred in the avocado farms of the Spanish Levante, in Castellón, where the situation was however the opposite – very high temperatures produced stress on the trees, loss of fruit and less fruit set. With the Ecoculture Biosciences solutions the trees were protected from the stress, and much more fruit set was registered in comparison with those trees where the products were not applied.

Following the Ecoculture program for avocado crops, CalFlux should be applied at the end of the flowering phase and at the beginning of fruit set, since it acts as a kind of “glue” for the small fruits in the panicle, achieving a higher success rate. CalFlux also helps to obtain better developed fruits, with higher weight, lower rate of physiological disorders and diseases and less dehydration in the later phases. Its acidic pH range makes it possible to use it in mixture with the majority of phytosanitary products and foliar fertilizers.

CalFlux provides a better cell structure, improves the size, quality, homogeneity and color of the fruit, being a highly efficient solution in situations where environmental conditions are adverse such as extreme temperatures, excess or lack of water, poor or excessive lighting conditions or salinity, which normally lead to losses of flowers and fruits.

The second application of CalFlux should be made together with XStress in order to enhance the preservation of the fruit in the panicle. XStress is a powerful anti-stress product that considerably reduces the negative effects the stress produces on the plant. One of these negative effects is the fruit abortion in the initial phase. Subsequently, regular applications should be made during the fruit growth in order to reduce the effects of environmental stress and two more applications before the harvest to improve the post-harvest condition of the collected fruit. XStress is a result of the most advanced knowledge in nutritional technology used to moderate the response of plants to environmental stress, ensuring a healthier plant with significantly higher yields than expected.

In addition to the application of these two products, the company from Almeria proposes fertilization programs for tropical fruit as a solution to alternate bearing and the loss of productivity of avocado caused by climate change. Ecoculture has already achieved excellent results in production and quality in avocado crop in an area with very adverse climate conditions such as the Alpujarra region in Granada, exceeding 15,000 kilograms of production per hectare in an avocado crop in Órgiva, solving fruit drop problem, size reduction and deficiencies of zinc or calcium, as well as alternate bearing.

Thanks to its great results, Ecoculture Biosciences has recently reached agreements for the distribution of its specific solutions for avocado both in the Costa Tropical of Granada and Malaga and in Valencia, thus covering the two most important avocado producing areas of the Iberian Peninsula.