Lincolnshire Wolds grower Tim Lamyman has broken his own world record for oilseed rape yield with a harvested crop of more than 7t/ha by encouraging good rooting and cutting plant stress in the summer heatwave.

The record-breaking crop was of the new DSV-bred hybrid variety Sparrow. It registered a yield of 7.01t/ha, breaking Mr Lamyman’s 2015 record of 6.7t/ha from the variety Picto, and comes after many crops achieved lower yields in the hot summer. Mr Lamyman put the success down to his EcoCulture seven-spray foliar feed programme, which created deep roots in the winter and relieved plant heat stress in the summer, producing a crop well above this summer’s farm average yield of 4.8-5.0t/ha. 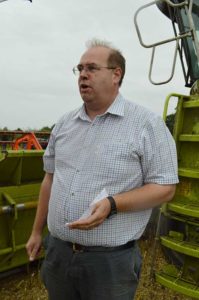 The EcoCulture products applied in this program were:

Two foliar feed treatments during flowering helped stimulate growth, keep the crop greener for longer and fight off the effects of the hot weather, he said. “We have been able to control the extra stress from the heat, and the crop was able to put on yield while other crops on the farm were not able to do that,” he said. The record-breaking crop was grown on an 8ha field of chalky sandy-clay loam on his predominantly arable 600ha farm at Worlaby, just south of Louth, which had not seen rapeseed for 10 years. It was drilled in mid-August, received 260kg/ha of nitrogen and was harvested on 26 July.

The crop was damaged by pigeons over the winter, but when examined in March it showed a good root structure with long, straight roots to 200-250mm depth. This showed the crop had yield potential. Previously, two sprays of the calcium-rich foliar feed CalFlux were used at flowering, but this time the second spray was replaced by XStress, containing copper, iron, manganese and zinc. The record yield was standardised at 40% oil content and 9% moisture, and the harvest was overseen by independent adjudicators. Source: Farmers Weekly. https://www.fwi.co.uk/arable/harvest/lincs-grower-breaks-oilseed-rape-world-yield-record