The EcoCulture strategy to reduce alternate bearing in Tree fruit.

This process has a great economic implication, since logically the ideal is an equal production each season.

Crops that are affected by the alternate bearing tend to be almost all fruit trees. Depending on the species, they will have a greater or lesser degree of affection due to this phenomenon. Citrus, apple, tropical, etc.

Why does the alternate bearing occur?

It is usually a regular and biannual process so environmental factors are not responsible for this situation although they contribute significantly to it’s expression. The real reasons must be sought in internal physiological factors:

Methods of control of alternate bearing

Traditionally, alternate bearing has been fought with methods such as pruning, thinning of fruits bark scratching, whose success depends largely on the species, variety and climate.

EcoCulture has developed an effective and simple program to greatly reduce the negative effects that this phenomenon produces in fruit crops.

The EcoCulture strategy against alternate bearing 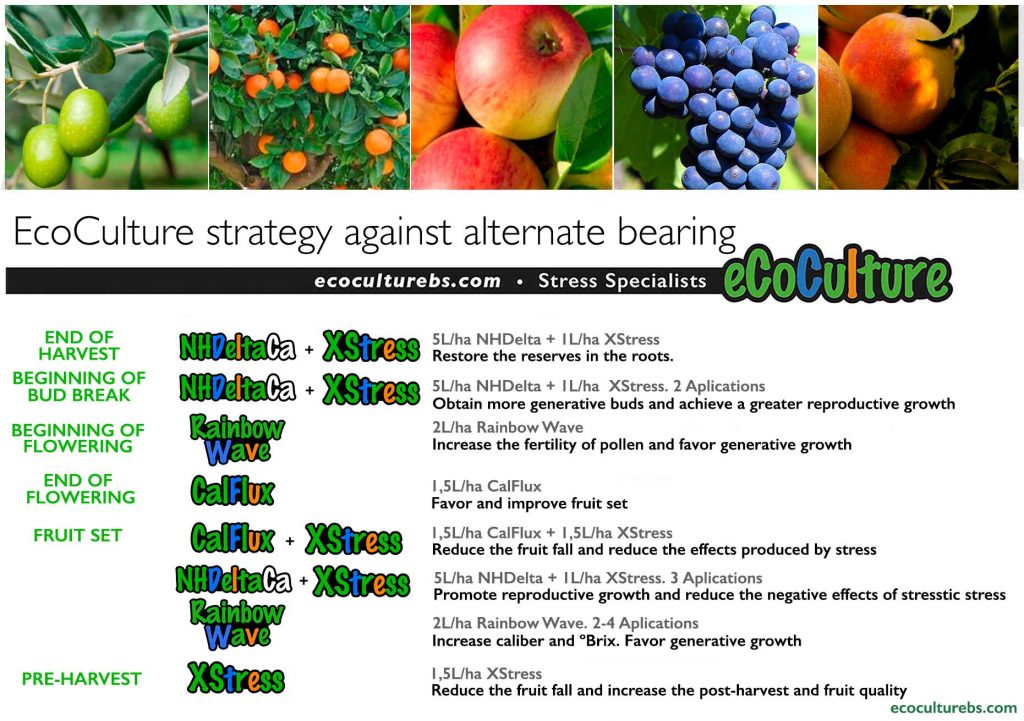 This program of EcoCulture favors not only a drastic reduction of the effects of the alternate bearing but also a remarkable increase in the quality and post-harvest of the crop.

NHDeltaCa facilitates that the tree always has at its disposal a greater quantity of the necessary nutrients in the forms that are better absorbed, generating a better system of secondary roots, responsible for the absorption. More about NHDelta

CalFlux ensures a better fruit setting, a better fixation to the peduncle reducing abortions and a better quality and firmness of the fruits. More about CalFlux

XStress is a powerful tool to combat abiotic stress, which along with the nutrients specially combined to develop this product improves the growth of the crop in extreme conditions such as high or low temperatures, frosts, floods or droughts, excess luminosity, high concentrations of salts, etc … Used at the end of the fruit development cycle, improves the post-harvest process. More about XStress