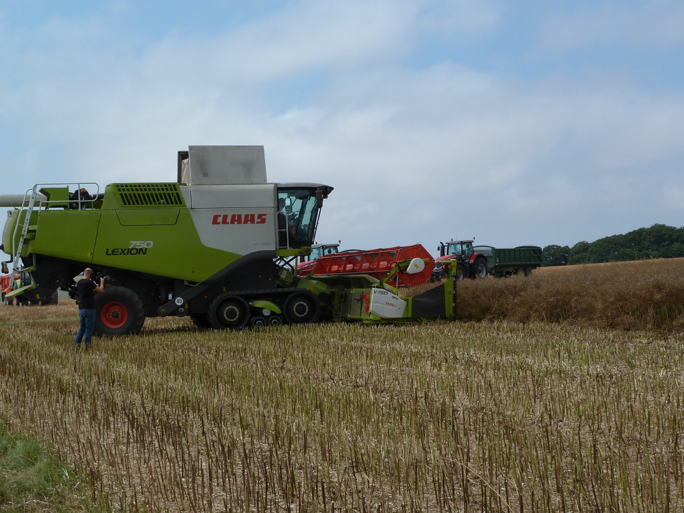 Tim Lamyman of Worlaby Farms, near Louth has set a new world record from a 22acre block of Charger oilseed rape.  His target was a gross output of 6t/ha which he beat by 0.14t/ha.

Mr Lamyman – who holds the current UK wheat yield record with a 14.31t/ha crop of KWS Kielder – says that the Charger cut well, but combining was a steady job because of the thickness of the stems and the size of the pods.

However, his 6.14t/ha gross output could have been even higher as sea fret delayed the record breaking attempt – and with a relative humidity of 78% for much of the day – this may well have had an effect.

“You could see the potential of the crop from the combine cab, in the way that the weight of the pods meant they had filled back in over the tramlines 14 days after we had sprayed the crop with glyphosate,” says Tim.

Each trailer load was sampled and weighed at the public weigh bridge at  Glebe Farm, Belchford, 3-4 miles away and weights were adjusted to take into account diesel consumption at the start and end of the four hour combining period.

Over the four hours the crop was combined, moistures dropped from 13.7% to 12% and the seed yield was calculated on an agreed 9% standard for the 7 trailer loads.

Three independent adjudicators oversaw the record breaking attempt.  They were lead by machinery consultant Bill Basford – who has been called upon to assess a number of previous UK yield records – and he was supported by Chris Rothery and Richard Harvey.

The day prior to the record attempt, seed yields off the headlands were coming off at 5.5t/ha at 9.6% moisture.  Some parts of the field did 7.6t/ha, and even while others areas were 2.2t/ha behind, they were still a respectable 5.4t/ha.

Mr Lamyman chose Charger – which is joint top variety for yield on the UK Recommended List – having seen it at Cereals 2013.  “It looked well in all three plots at the event and clearly had the potential to produce a good, secure canopy on stiff, short straw,” he says.

The Charger was drilled on August 14th at 2.5kg/ha and followed two winter cereals, the previous crop being winter barley.  “It was fast to emerge and had good vigour and rooting in what was a perfect autumn and looked like a record breaking crop from word go,” he says.

Mr Lamyman’s nutritional approach probably sets him apart from most growers.  His view is that the little and often targeted nutrition, ensures that the crop is getting what it needs when it needs it and has been working with agronomist Simon Shaw from Farmacy part of the Hutchinsons group to tailor inputs accordingly.

“We believe we have gone as far as we can with fungicides and in some respects we are going backwards as disease resistance increases; we are trying to take the stress out of the plant through nutrition.”

“The key is to ensure that there’s no part of the field that is in stress and by delivering nitrogen that is more bio-available, every plant has better potential to maximise yield,” he says.

The Charger crop had the following products from Ecoculture’s product range: NHK Delta and 1-4-ALL  – Delta is a stabilised nitrogen and potassium and 1-4-ALL is a trace element product – applied to the OSR crop seven times throughout the season, starting at the 2-leaf stage.

“Throughout the year we’ve seen no signs of any stress and the crop was greener for longer than other parts of the farm,” he says.

NHK Delta was backed by calcium formulation, Calflux, and then Rainbow Wave at flowering to deliver potassium to satisfy the high demand at grain formation.

The boron and molybdenum within Rainbow Wave also meant that the Charger crop was a darker green right through to maturity.  “The pods were very even and numbers were very good,” he says.

Tim Lamyman could well find his name against another record in the next 3-4 weeks.  He has high hopes for a field of KWS Kielder winter wheat which he is hoping to cut at the end of August.

CONGRATULATIONS TO TIM FOR THIS FANTASTIC RECORD!!!