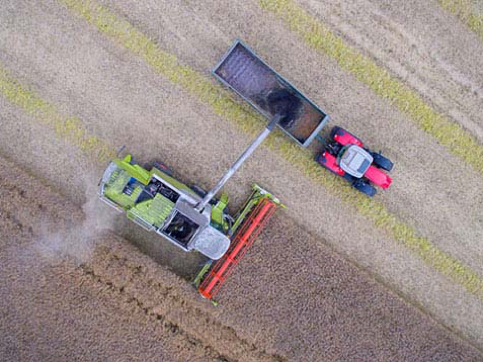 Lincolnshire Wolds grower Tim Lamyman has broken the world oilseed rape yield record with a crop which was the thickest and greenest he has ever harvested.

He clocked up a yield of 6.7t/ha for the variety Picto on the best field on his farm, clearly beating the previous record by nearly 0.5t/ha using Ecoculture products, distributed in the UK by Bionature.

The crop was so dense it twice blocked his combine and he had to resort to turning off the straw chopper and slowing down to deal with the amount of material going through his Claas machine with a 25ft header.

“This was the most even crop I have even seen, it is packed with pods and you cannot see 10-15cm into the crop,” he told Farmers Weekly in the cab of his Lexion 750 combine while cutting the record-breaking crop.

Harvesting the crop on Wednesday 5 August, the combine yield reading went from 4.8t/ha to 10.0t/ha and moisture fell from 11 % at the start of cutting to 8.6% at the close of play.