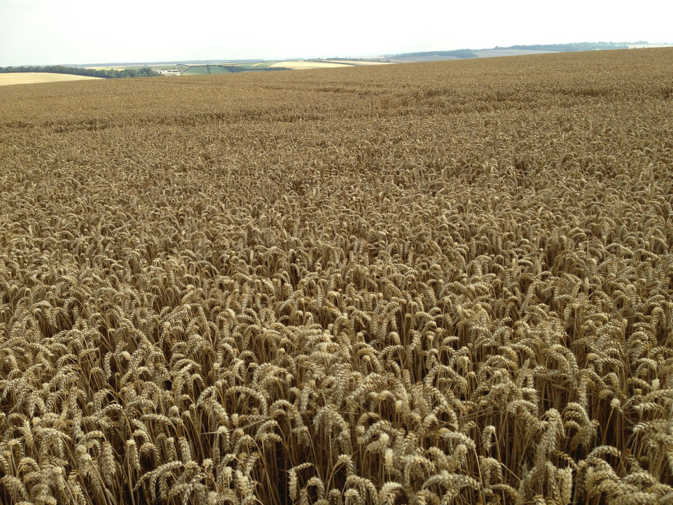 On Thursday 5th September, Mr. Tim Lamyman broke the UK wheat record with an incredible yield of 14.31 t/ha, on a crop of Kielder winter wheat.

Tim, who farms on the Lincolnshire Wolds, has been using Ecoculture’s NHCa Delta and 1-4-All as an essential part of his agronomy programme to achieve this result.

Tim is a proponent of applying the products on a ‘little and often’ basis, starting with an autumn spray at leaf emergence and then at tillering, stem extension and flag leaf. NHCa Delta is applied at 5.0 l/ha tank mixed with 1-4-All at 2.0 l/ha.

Tim explains that the early autumn application is essential for plant establishment and to promote tillering in the crop, while the spring applications ensured even growth and improved rooting, despite the high stress conditions of 2013. The Flag Leaf spray really helped fill the grain, with what Tim has christened the “Delta Green Effect” keeping the wheat in good growing condition. It is telling that Tim could maintain active crop growth for nearly a full year from sowing to combining.

Tim is convinced that the NHCa Delta and 1-4-All work synergistically together, reducing plant stress and removing obstacles to the crop reaching its maximum potential.

The record is even more impressive considering that the average yield on the 21.12 acre field included a poor headland strip, some missed drilling and variable soil type. The best parts of the field were averaging over 14.8 t/ha, with the yield monitor occasionally hitting a staggering 16.3 t/ha.

Mr Patrick Salmon, Director of the UK distributor company Bionature, has been working closely with Tim over the past three years, fine tuning the recommendations for Delta and 1-4-All.

“We have seen some incredible yield results in cereals in 2012 and 2013, so it is no surprise Tim got the record commented Pat, “What is astonishing though is that we managed it in a year when the weather has been against us and on land that although good is not the best in terms of wheat growing. We are hoping to get these products to a much larger number of farmers through our strategic partnership with Hutchinsons.”

Tim was unsurprisingly jubilant about taking the UK record, attributing much of his success to the use of NHCa Delta with 1-4-All which had made the crops more resilient to adverse weather and soil conditions.

“We’re on grade two Wold land, so there’s no room for mistakes,” he said. “The Bionature products improve field evenness – the bad patches are doing much better than they used to as the plants are better rooted and can withstand more difficult conditions.”

Congratulations to Tim and Bionature for achieving this fantastic record.